Looking for the best Umbria tourist attractions? Visit Spoleto and the surrounding areas   Umbria attractions are always popular with Italians, as well as with foreign tourists. One of the best places to visit in Umbria is Spoleto, a town in the province of Perugia. It is one of the oldest cities in Italy, located on the southern plain of the Umbrian Valley, close to Monteluco. Its history dates back more than 2500 years ago, when the city was founded by the Huns. In 241 BC it became a colony of the Roman Empire. Thanks to this historical period, the city took the name of “Spoletium”: visiting Spoleto will make you see evidence of ancient Roman influence in the buildings, in the monuments and in the works of art we will discuss later. In the 4th century with S. Brizio, first bishop of Spoleto, the city became an episcopal seat. Several churches and monasteries in the city and in the surrounding countryside date back to this period. Later Spoleto became a duchy during the Lombard domination and then under the Holy Roman Empire. The Franks and the State of the Church had been fighting over Spoleto for some time, the latter prevailing in 1240. In 1809 the Papal States were annexed to France: the Trasimeno Department was created and Spoleto was appointed capital of this department. After World War II, the institutions enhanced the artistic and cultural works of the city with the restoration of buildings and monuments, as well as the creation of new events that we will see later in the article dedicated to the best places to visit in Umbria around Spoleto. Visiting Spoleto is immersing yourself in an ancient times: thanks to the influences of various conquerors, the city is rich in monuments, churches, noble palaces

Looking for the best Umbria tourist attractions? Visit Spoleto and the surrounding areas   Umbria attractions are always popular with Italians, as well as with 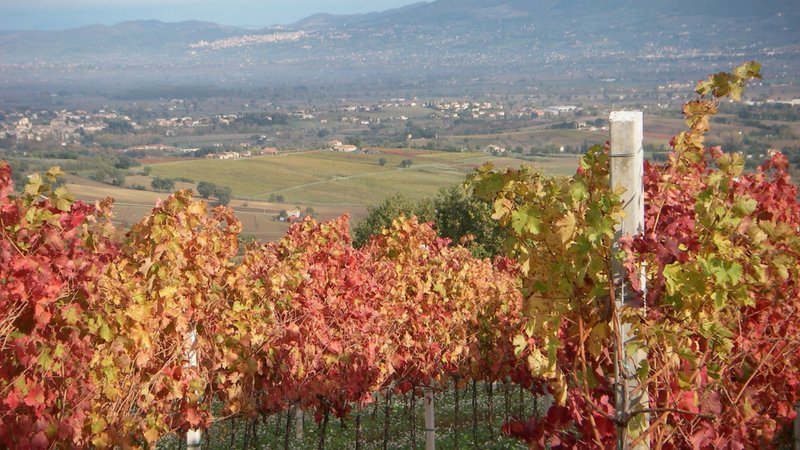 Montefalco Sagrantino is the red wine that has made Umbria famous around the world.   Describing what makes this red wine so unique requires more than one word: it is its charisma, its essence and its mystery. Sagrantino is grown exclusively in Montefalco, a village of ancient Roman foundation, and in the towns of Bevagna, Gualdo Cattaneo, Giano dell’Umbria and Castel Ritaldi. This grape variety has no relationship with other Italian varieties. It seems that its origin is to be found among the branches of the Georgian Saperavi family tree, beyond the Caucasus: in fact, it could have come to Italy with the pilgrimages of the Franciscan friars who had had the opportunity to appreciate its high sugar content and excellent resistance to rot. In the 14th century, in Montefalco, laws that were invoked to protect the local “sacred wine” had already been in force. On the producers who did not own vineyards, but shared their harvest, the law imposed the same penalty that was imposed on thieves; in the 17th century, the death penalty was applied to those who had cut a vine owned by others. At the time Sagrantino was not sold: it was used only for religious festivals, for family occasions and by priests to officiate the communion. It is no coincidence that the term “Sagrantino” is traced back to the concepts of “sacred” and “festival”. At one time, Sagrantino was produced only in the passito version. After the harvest, the bunches had been left to wither for a few months, obtaining a “passito” variant of the wine. The reason is simple: this grape is characterised by small berries and does not give abundant crops. These characteristics give Sagrantino an exceptionally high tannin content. The solution developed in the Middle Ages was to balance the tannins through the drying process, which concentrates the sugars that are naturally

Montefalco Sagrantino is the red wine that has made Umbria famous around the world.   Describing what makes this red wine so unique requires more than one

What are truffles? All about Italian truffles
What to see in Grosseto and surrounding areas
The Lakes of Basilicata