What is pesto? What is pesto made of? Let’s discover together with Laura Bullio, Sommelier and Food Ambassador of Italia Delight, the Pesto genovese, the second pasta sauce in the world, which must be used strictly cold, but leaving free space for imagination…

Writing an article on pesto genovese is like climbing the Matterhorn (as a mountaineering enthusiast), that is talking about one of the most famous sauce for pasta of world cuisine, the second best-known, eaten and sold pasta sauce in the world. So I start with a personal note, not thinking of adding anything new or original, but with the memory of who (the undersigned), when she arrived in Genoa in 2008 for work, as a passionate about cooking, in 2009 she signed up, for fun, to the preliminary rounds of the then new World Pesto Championship (we will discuss about it at the end…), which has now become a world competition. I came out defeated from the very first qualifying rounds, but with a nice Italian marble mortar and pestle (essential to allow the pulping of the pesto ingredients in a correct way), a deep pain in the wrist for months (because the beating movement of the pesto ingredients foresees a very accentuated and prolonged twist of the wrist) and many pesto jars in the freezer (because I trained to make pesto genovese every evening and therefore production had become unthinkable to dispose of!). 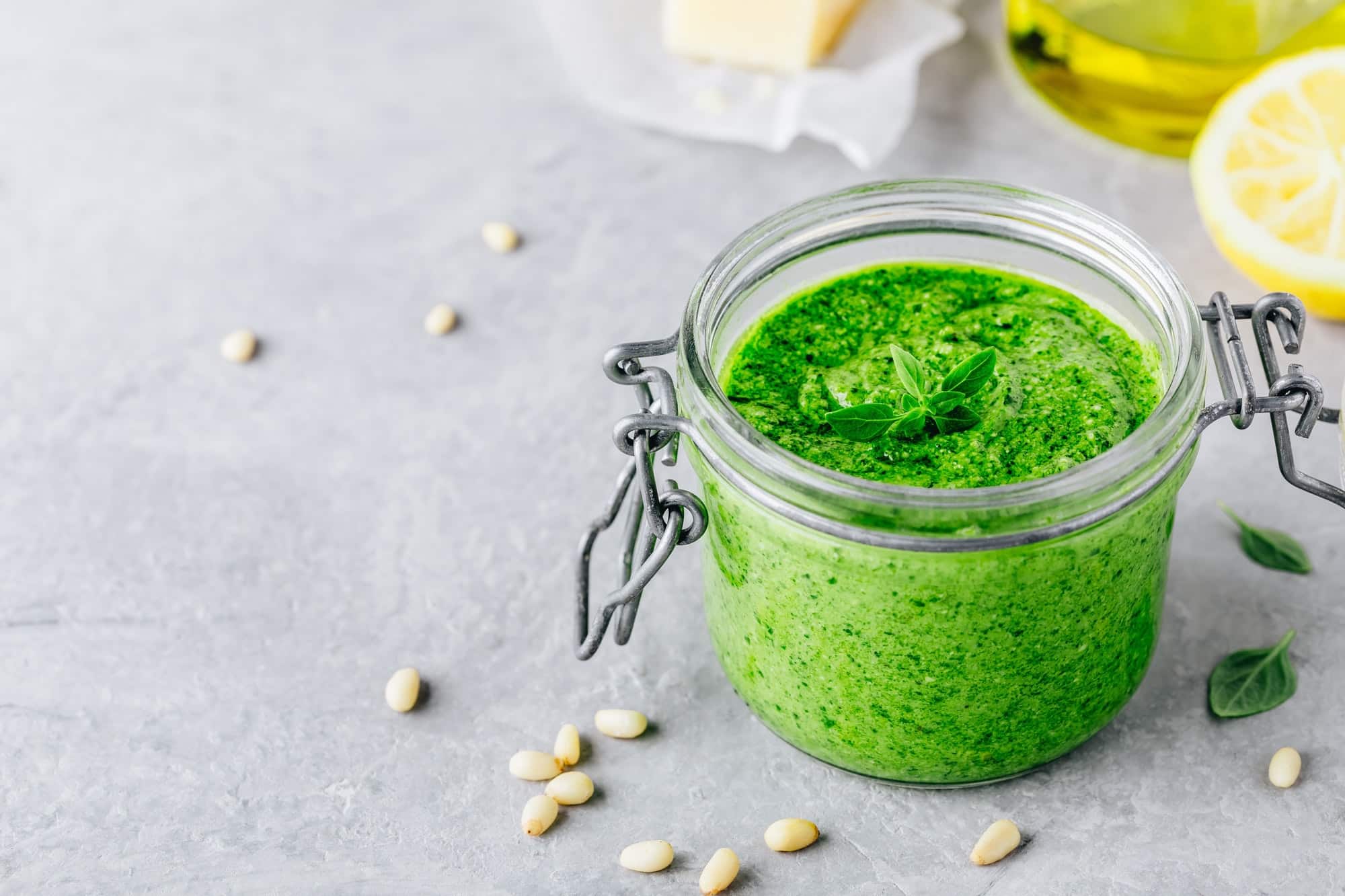 Concluded this small personal dissertation, we come to the historical news that connote the birth of pesto and place it relatively recently. The recipe for pesto, as we know it today, does not in fact have very ancient origins and dates back to the mid-nineteenth century. The first to mention the pesto genovese is in fact a well-known gastronomist of the time, Giovanni Battista Ratto, who in his work, “La Cuciniera genovese”, proposes the following recipe for pesto: “Take a clove of garlic, basil (baxaicö) or if not of this marjoram and parsley, Dutch cheese and Parmigiano Reggiano cheese grated and mixed together, the pignoli and pounded all in a marble mortar with a little butter until it is reduced to fresh pesto sauce. Dissolve it then with fine extra virgin olive oil in abundance. With this pesto sauce, the lasagna and the gnocchi (troffie) are seasoned, adding a little warm water without salt to make it more liquid”. Compared to the current recipe for pesto genovese, there is the Dutch cheese, widespread in Genoa due to maritime trade with the countries of Northern Europe, and basil and marjoram as alternatives to parsley, due to the strict seasonality of basil growing at that time.

Despite its relative recentness, the original pesto genovese seems to date back to the evolution of a much older one, the aggiadda (agliata), a thirteenth-century garlic-based mortar sauce that was used for the preservation of cooked foods, and meeting the aromatic herbs, of which Liguria is traditionally the cradle, gave rise to this extraordinary type of sauces.

Now we start by explaining its correct name, which is “Pesto Genovese”, without any additional preposition such as “Pesto alla genovese”, as defined by the Consortium and by the pesto production specification that has precisely established how to make pesto and sell pesto genovese with the consortium’s trademark.

And here is the traditional recipe for pesto genovese, quantities and procedure for learning how to make pesto, the home made pesto from Genoa with Italian marble mortar and pestle. 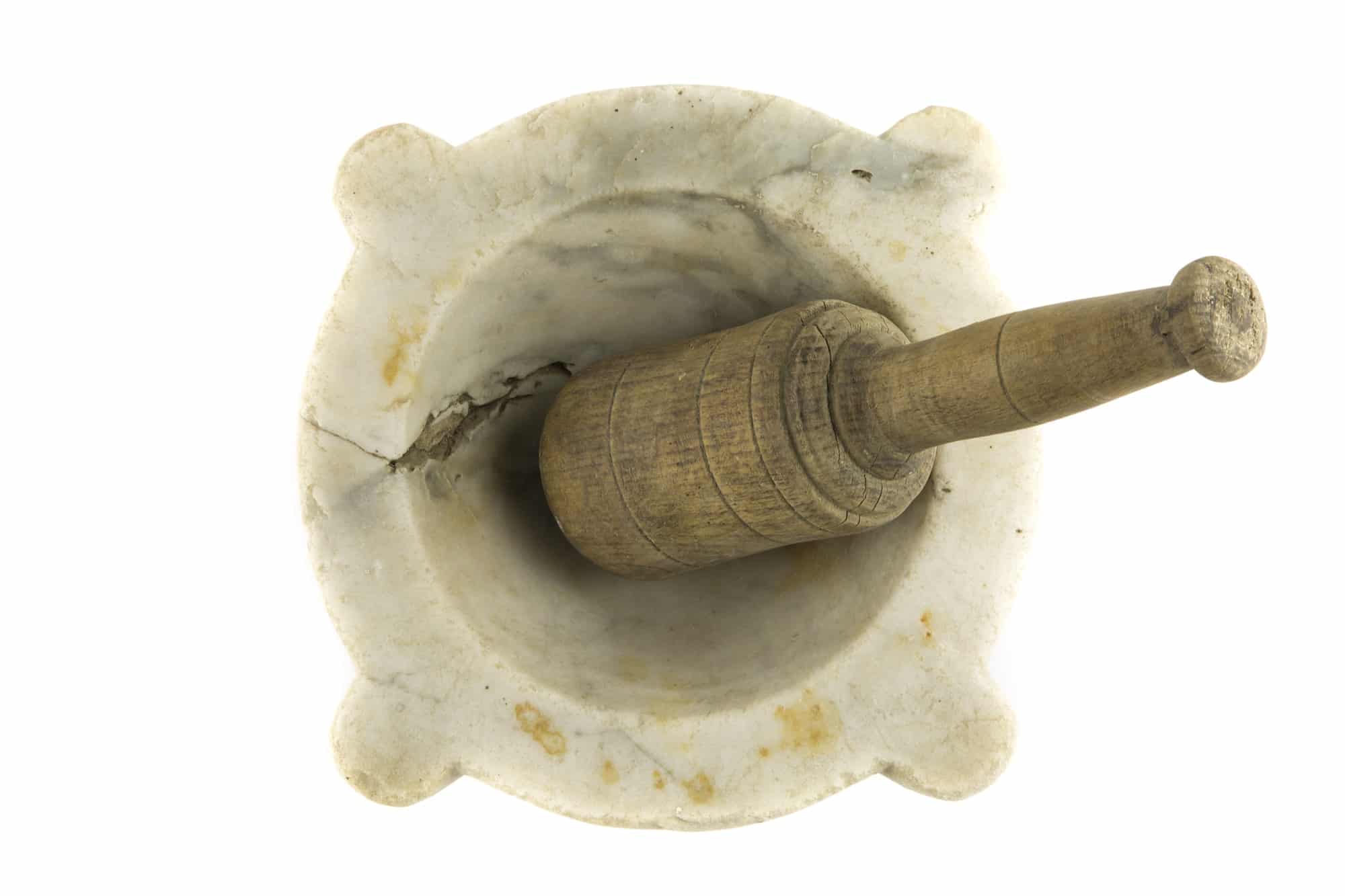 How to make pesto sauce:

Making pesto at home? Follow the recipe for home-made pesto! Wash the basil leaves in cold water, dry without wrinkling them. Crush the garlic in the marble mortar and reduce it to a pulp, add the pine nuts and continue to crush, reducing it to a homogeneous paste, remove from the mortar. Fill the marble mortar with the basil leaves, add the 5 grains of salt. Crush and swirl for a long time until a homogeneous mixture is obtained. Add the pine nuts already crushed and always by twirling insert the cheeses. Incorporate the poured extra virgin olive oil until a medium density pesto sauce is formed.

But can you make pesto without garlic? To see the shelves of supermarkets you should answer yes, but speaking of the original recipe for pesto absolutely no! Just look at the procedure to make pesto genovese that involves, as the first fundamental step, to pound the garlic so that the marble mortar immediately smells of that unmistakable flavour. So you can advise those who do not like the garlic very much to reduce the quantities, but not to eliminate it in order not to distort the recipe for pesto, which otherwise becomes a basil sauce, not a pesto genovese!

How to store pesto? How long does pesto last? The pesto genovese must be kept in the fridge and once made, or the pesto jars are opened, it must be consumed in 5-6 days, always keeping it in the fridge, well covered with extra virgin olive oil and with the cap tightly closed. Can you freeze pesto? Since the preservation method is cold, freezing green pesto is possible without losing its freshness; the only warning in this case is to put the fresh pesto genovese in the freezer without extra virgin olive oil, to be added once thawed. But frozen pesto can also be used at the last minute, by adding a little cooking water from the pasta to the frozen pesto: the water will thaw the pesto genovese and you will finally add Ligurian olive oil.

Yes, but… how to use pesto? Pesto genovese is generally used as a sauce for pasta. We can choose different types of pasta, but in the sign of tradition. Pesto genovese is mostly used with trofie, a type of pasta made from flour and water with an elongated and thin shape. The trofie recipe is originally from Sori, a municipality situated a few kilometres from Genoa which in 2019 obtained the De.Co trademark as a shape of pasta closely linked to the territory and to the local community. There is also a type of trofie mixed with chestnut flour which takes the name of “bastard” trofie, a little-know trofie pasta recipe.

But the local tradition also wants pesto paired with potato gnocchi or trenette. In this case, the version made with a certain amount of bran flour deserves a mention: thanks to its roughness and particular flavour, it lends itself optimally to be seasoned with pesto genovese especially if accompanied by potatoes and green beans.

But there are many other traditional Ligurian pasta types that are used in combination with green pesto. Like “mandilli de saea”, or silk handkerchiefs, very thin sheets of fresh pasta that are often made in ancient trattorias in Genoa (and this is the only correct version of lasagna because it is cold seasoned only with pesto sauce). Most likely the least known, especially for those who are not from Liguria, are the croxetti, a type of pasta made of water, wheat flour and salt; there are two types of croxetti: those of the Polcevera valley, with a characteristic small 8 shape and those printed (corzétti stanpæ or corzetti del Levante). They are called “printed” because the decoration of these small medallion-shaped pasta circles is obtained by means of a wooden mould that decorates the pasta in order to “prepare” it to better accommodate the dressing. And in some craft shops in the historic centre there are still those who manufacture these moulds.

Finally, testaroli, an ancient pasta originating in the Lunigiana area (between La Spezia and Massa). It takes its name from the container where this pasta is prepared, the “testo”, that is a large round pan. They are made with water, flour (in ancient times spelt) and salt and are prepared by mixing the ingredients in a fluid wood-fired batter for a few minutes to form a kind of crêpe of a few millimetres thickness, which is then cut into pieces in an irregular shape.

Wine pairing with Pesto and where to buy pesto sauce

What goes good with pesto? Pesto genovese is a cold sauce born as a pasta sauce, but of course your imagination can indulge in the combination with just one trick: never heat it! So no to lasagna, no to pizza (if the pesto is cooked), no to creaming the pasta in a pan. However, the pesto genovese can be used leaving room for inspiration: for example, it is typical in Genoa to find it added at the last moment to the minestrone, but also on the croutons as an aperitif. And then try it on the caprese salad (on tomato and mozzarella it is excellent!), as a lovely accompaniment to boiled meat instead of the Piedmontese green sauce, alongside fish carpaccio…

As far as wine pairing with pesto is concerned, given the marked herbaceous notes of pesto genovese, it is advisable to pair it with young white wines, medium bodied, rich in aromas, herbaceous and savoury. These are the characteristics of Ligurian white wines, Vermentino and Pigato above all, but wanting to come out of Liguria, Sauvignon or French Sancerre white wine also pair well with pesto genovese. Then of course it depends on what you season the pesto with: the sweet note of pasta suggests the described wine pairing, but if you use it with fish and meat, obviously the recommended food and wine pairing may change. 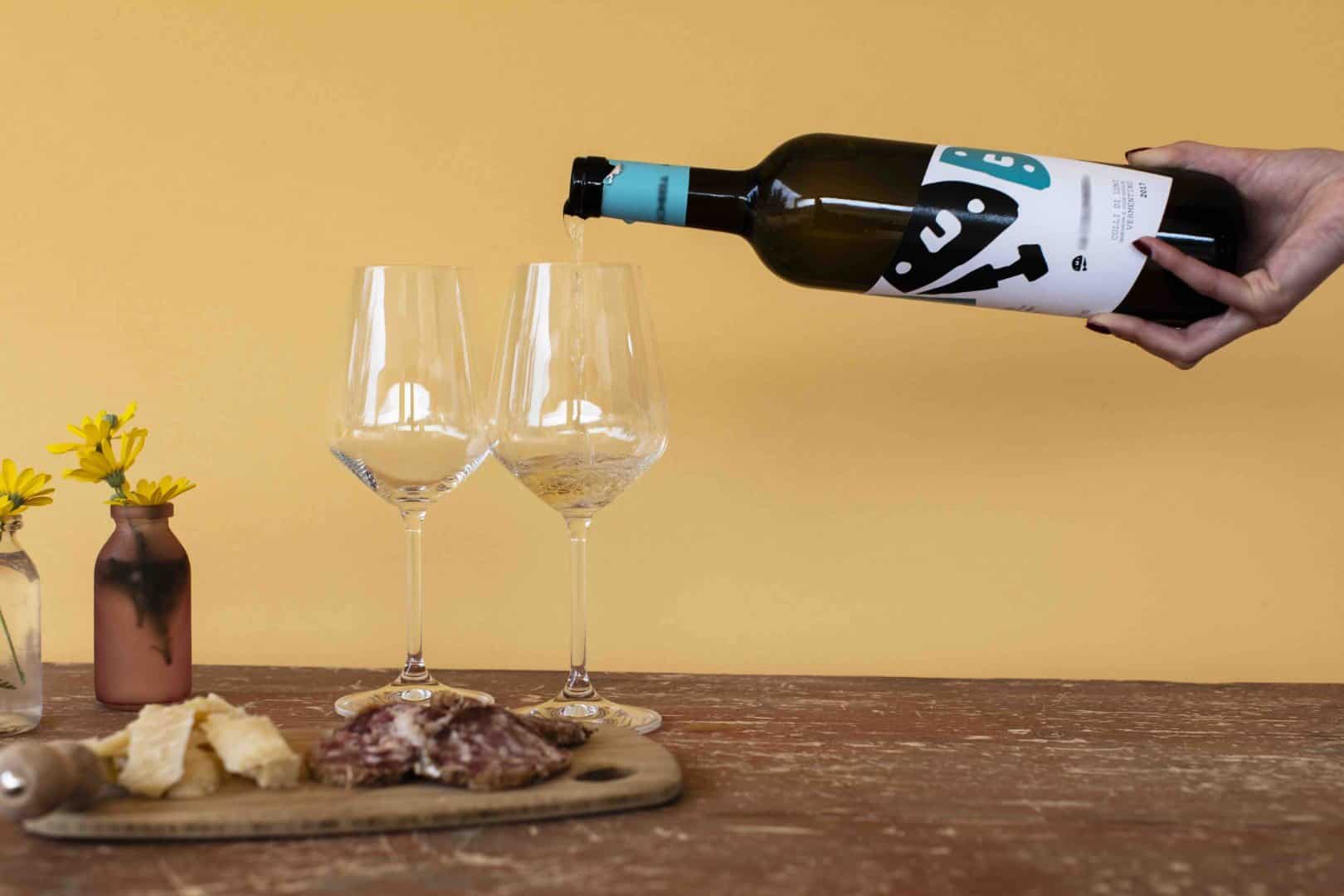 Where can you buy pesto sauce? In Genoa, pesto is found everywhere: there are many shops that also offer street food menu ideas, you can buy it in delicatessen, in fresh pasta shops, in some bakeries and there are many good ones, so it would be really impossible to make purchase suggestions. The only one I must mention is Roberto Panizza: he is the owner of “Pesto Rossi 1947” and “Il Genovese” restaurant, as well as the President of the Palatifini Cultural Association that created the World Championship for Genoese Pesto Made with a Mortar (a competition I mentioned in the opening). It takes place every two years and in the last edition, in 2018, it saw 100 competitors in Genoa (50 from Liguria, 25 from the rest of Italy and 25 from abroad) and 30 Italian and foreign judges, including journalists, food experts, restaurateurs and tasters. The final of the eighth edition of the World Championship for Genoese Pesto Made with a Mortar should have been held in these days but it was postponed due to the Coronavirus infection. It will take place on September 26th, while the day of September 28th will be full of events and initiatives starting from the “Pesto Party” at Palazzo Ducale: the event will celebrate the product symbol of Genoa and Liguria through music, films, cooking courses for young and old and other events.

So in a few months you can plan a nice weekend in Genoa to attend the championship and taste the traditional pesto recipe, but now, in respect for the #stayathome, you can try to how to make pesto at home. And if you don’t have an Italian marble mortar and pestle (notwithstanding the period 😊), you can also use a mixer, taking care to put it in the freezer before using it as the blades must be well cold in order not to blacken the basil.