Valtellina wine: where the vines cling to the warmth of the rocks! 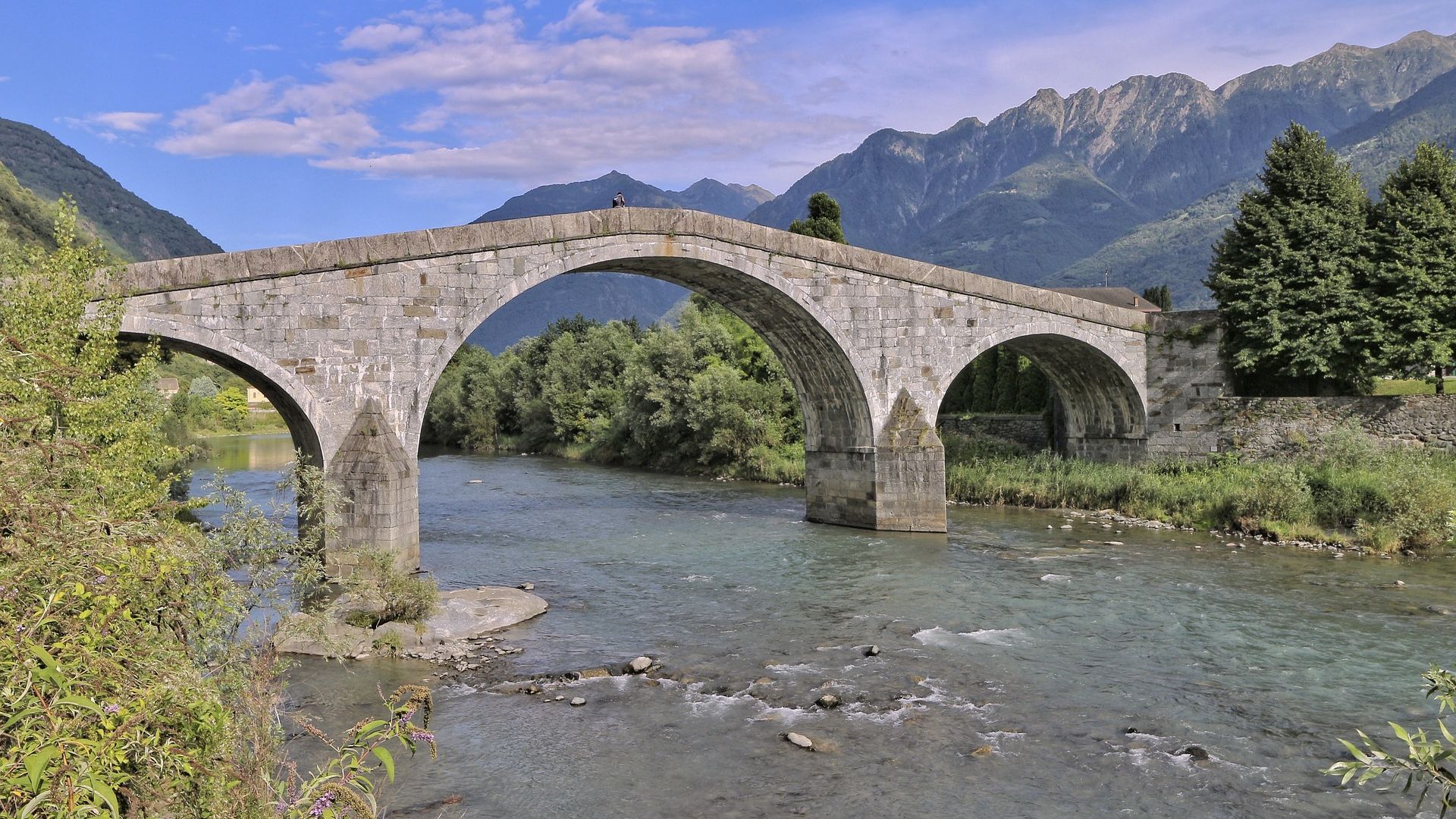 Valtellina wine: where the vines cling to the warmth of the rocks!

Come with me to discover the wines of Valtellina, between history and pairings with local dishes!

With these words, the genius Leonardo Da Vinci described his memories of Valtellina in the Atlantic Codex.

The Valtellina is the only large Alpine river valley stretching from east to west. 120 kilometres long and about 65 wide, it is composed of two main valleys: that of the Adda, which rises in the Bormio area, crosses Alta and Bassa Valtellina and plunges into Lake Como, and that of the Liro and Mera, which corresponds to Valchiavenna, from the Spluga Pass and Val Bregaglia to Lake Mezzola.

Located in the north of Lombardy, on the border between Italy and the Swiss canton of Graubünden, the Valtellina is the Rhaetian side facing south. It benefits from a microclimate that allows the grapes of the vineyards in this area to grow and ripen. Here, the vines are clinging to the rock of the mountains thanks to an infinite number of dry stone walls, which characterise the entire lower Valtellina area as far as Tirano and part of Val Chiavenna.

And in Valtellina these dry stone walls, a UNESCO World Heritage Site since 2018, extend for 2,500 kilometres, making it the largest terraced vineyard area in Italy. Dry stone walls and stone steps without handrails, called Tzapel, through which the grape pickers bring the grapes stored in panniers down to the valley, hence the name in these territories of “heroic viticulture”.

These little walls, on average one metre high, but which can be as high as four, are a fundamental factor in the connotation of Valtellina wine, as recounted in “Rupi del vino”, a 2009 documentary directed by Ermanno Olmi that pays tribute to heroic viticulture in Valtellina. The dry stone walls, together with the good exposure to the sun, the “Breva” (the mild breeze from Lake Como), and the low rainfall, create excellent conditions for the development of vines in this harsh area of the central Alps.

Does Valtellina fascinate you? Discover it with a tailor-made food & wine tour!

THE HEROIC WINES OF VALTELLINA

Valtellina wine is mainly produced from the Nebbiolo grape variety, locally known as “Chiavennasca”. It adapts well here, creating wines for long ageing, with a unique character in terms of elegance and bouquet. Situated in the province of Sondrio, in a landscape characterised by terraced vineyards that follow one another relentlessly, Valtellina is the only Italian wine-growing area where two DOCGs (Sforzato di Valtellina and Valtellina Superiore) co-exist, coinciding in terms of vineyards and territory.

Valtellina Superiore is a red wine for ageing, austere, dry and rightly tannic, yet velvety. The denomination comprises 5 sub-zones: Sassella, Maroggia, Grumello, Inferno and Valgella, each with its own distinctive characteristics.

Sassella, in the western area of Sondrio, is the historical and most famous sub-zone. It is made on an impervious and particularly sunny area of 116 hectares. At the centre of this territory, there is the cliff of the Marian sanctuary of Sassella, from which the wine takes its name, meaning precisely rock, cliff. In terms of pairing, Sassella is excellent with Sciàtt valtessinesi, buckwheat pancakes with a heart of Casera cheese.

Maroggia, a locality within the municipality of Berbenno, is adjacent to the Sassella wine region. It is the most recently recognised subzone. Produced in limited quantities (25 hectares of vineyards), Maroggia is linked to the figure of Benigno De’ Medici, who in the mid-15th century stopped in Maroggia, where he found hospitality and refreshment. He particularly appreciated the local wine, describing it as “firmum et dulce”, that is, full-bodied and sweet. It pairs well with red meats, game and mature cheeses.

Grumello, north-east of Sondrio, takes its name from the castle that dominates the valley. A 13th century fortress that overlooks the town and from where you can enjoy a breathtaking panorama over the vineyards and the valley. The classic pairing is with important meats and mature cheeses.

Inferno is the smallest sub-zone located to the east of Grumello, with a name as singular as it is telling. It refers to small terraces in rocky ravines located between Poggiridenti and Tresivio, which are not easy to reach. Portions of the slope where temperatures get quite high in summer, hence the name “Inferno”. It pairs well with traditional Valtellina dishes: polenta and the typical Valtellina-style lamb.

Valgella is the largest sub-zone. In the past, this red wine was largely destined for export to neighbouring Switzerland. Its name derives from “valgel”, which in dialect identifies the mountain stream running downstream. Of all the wines, it is the one that, due to its fresh floral notes, can also be enjoyed young with Pizzoccheri served with Savoy cabbage, potatoes and plenty of melted butter, bresaola and goat’s violin. Or, alternatively, with Gnocchetti di Chiavenna served with butter, sage and rosemary.

The other DOCG, Sforzato di Valtellina (or “Sfursat”) was the first Italian dry raisin wine to boast the denomination of controlled and guaranteed origin in 2003. It derives from a careful selection of the best Nebbiolo grapes, which immediately after the wine harvest, following a very ancient tradition, are spread out on mats in dry, well-ventilated rooms called “fruttai”.

The name derives from the practice of “forcing”, i.e. prolonging the ripening of the grapes. The drying process lasts an average of 110 days and when, towards the end of January, the Valtellina winter air has completed its action, the bunches will have lost 40% of their weight, concentrating the best juices and aromas. After crushing, there follows 24 months of maturation and refinement in wooden barrels and then in the bottle. And only then is this warm but cold red, with a minimum alcohol content of 14%, ready for tasting. It is an excellent meditation wine, although it pairs perfectly with alpine cheeses and meats, especially game.

In addition to the two famous DOCGs, we must not forget Rosso di Valtellina DOC, a controlled designation of origin that identifies the production of the mid-Rhaetian side of Valtellina. The latter is a wine region with the deepest soils and located at higher altitudes, up to 700 metres above sea level. The wine base consists of at least 90% Nebbiolo grapes and 10% Rossola and Pignola grapes. It is characterised by good body and structure, enhanced in finesse and elegance by the indigenous varieties of Nebbiolo.

The best way to get to know these great Italian red wines is to drive along the Wine Route of Valtellina, a fascinating 67 km long scenic road that crosses Valtellina longitudinally from Ardenno to Tirano.

The wine route winds its way through ancient villages, green sanctuaries, the remains of ancient castles and mountain peaks. On this itinerary, which can be travelled by car or motorbike, but also on foot or by bicycle, you can easily find many wineries offering wine tastings and guided tours.

For trekking lovers, a network of 11 itineraries between vineyards and suggestive views was launched in July 2022: 5 Story-Trekking routes to experience the places and stories behind Valtellina’s wine-growing on foot.

Also returning on 10 November 2022 is the Valtellina Wine Trail, the spectacular running race that passes through the vineyards, wineries, ancient villages and palaces of the Valtellina before reaching the final catwalk in the elegant centre of Sondrio.

THE OTHER SCENTS OF VALTELLINA

But in addition to wines, Valtellina boasts a centuries-old cheese-making tradition that has preserved to this day the typicality and genuineness of its cheeses, primarily Bitto and Valtellina Casera with the PDO mark.

Bitto, whose origins date back to the Celts, is produced during the summer season on the high-altitude pastures: a raw-milk cheese that encompasses the fragrances of the alpine pastures and whose maturation can last up to 10 years! On the other hand, Valtellina Casera is produced all year round in the valley bottom and is a semi-fat cheese. It is excellent both young and mature: a fundamental ingredient of traditional Valtellina dishes such as pizzoccheri or sciatt.

In addition to cheeses, mention must also be made of the famous Bresaola della Valtellina PGI, but also and above all the Pizzoccheri. Here is the recipe for the trademarked version made in Teglio.

_ Mix the two flours, knead with water and knead for about 5 minutes. Roll out the dough with a rolling pin to a thickness of 2-3 mm, from which 7-8 cm strips are cut out. Overlap the strips and cut them width-wise into noodles about 5 mm wide.

_ Cook the vegetables in salted water, the Savoy cabbage in small pieces and the potatoes in chunks, add the pizzoccheri after 5 minutes. After about ten minutes, scoop out the pizzoccheri with a skimmer and pour part of them into a hot pan, sprinkle with grated Parmigiano Reggiano cheese and Valtellina Casera PDO flakes, continue alternating pizzoccheri and cheese.

_ Fry the butter with the garlic, letting it brown well, before pouring it over the pizzoccheri. Without stirring, serve the pizzoccheri hot with a grinding of pepper.

If all seasons can be suitable for a weekend or a holiday in Valtellina, it goes without saying that, given the characteristics of Valtellina dishes and wines, the ideal season to enjoy them at their best is autumn, where festivals also flourish. September is definitely the richest month with “Il Grappolo D’Oro” in Chiuro (near Sondrio) starring the great wines of Valtellina, followed by “Eroico Rosso” in Tirano, the “Sagra del Bitto” in Val Gerola, and many other local initiatives.

Teglio, considered the gastronomic capital of Valtellina and home of the pizzoccheri, offers numerous weekends in the last months of the year to savour the pizzoccheri of the “Pizzocchero Academy” and other traditional local dishes. While in Sondrio, “Formaggi in piazza” is held at the end of October.

In short, it is always the right time to taste the flavours and wines of Valtellina!

What to see in Bronte, the City of Pistachio?
What to see in Lazise, between lake Garda and land?
10 Best Things to do in San Gimignano, the wonderful medieval town!