From transhumance to our table: the journey of traditional Roman foods between history and legend

Few things in Italy are excluded from the Italian love for witty jokes like cooking. When it comes to food, many Italians don’t like to joke. I could tell you about sadly broken ten-year friendships for a sterile and heated controversy about the presence or absence of an ingredient in a traditional recipe. And the absence, in the majority of cases, of a production specification or filed recipes, is certainly not helpful. Armies of purists suspended between mystical exaltation and Taliban intransigence feel entitled to have their say on every single recipe that our ancestors, driven mostly by the need to cook with what was there, miraculously put on the table.

What would our ancestors say today about this patriotic love for the much acclaimed and not always historically supported concept of “tradition” that forced them to solve the daily business of eating with a practical sense and a spirit of adaptation? We are saints, poets, navigators and, let me add, cooks.

The traditional Roman pasta dishes do not escape this unwritten law. And so, to date, if only you try to hint shyly about the possibility of adding onion to the (a)matriciana (I will then explain the meaning of the “a” caged between two brackets in one of the most famous Roman pasta recipes) or cream in the Carbonara, the unpleasant feeling of having pronounced an authentic heresy is reported. And no sensible motivation would be provided to justify such petty dissent.

Recently, I had a live carbonara cooking class on a Japanese television broadcast. Punctual, at the end of the execution, the question came that makes the heart of the Romans so palpitate when it comes to Traditional Roman foods: “But does the milk in the spaghetti carbonara go or does it not go?”. The dilemma, apparently, has also come to Japan. 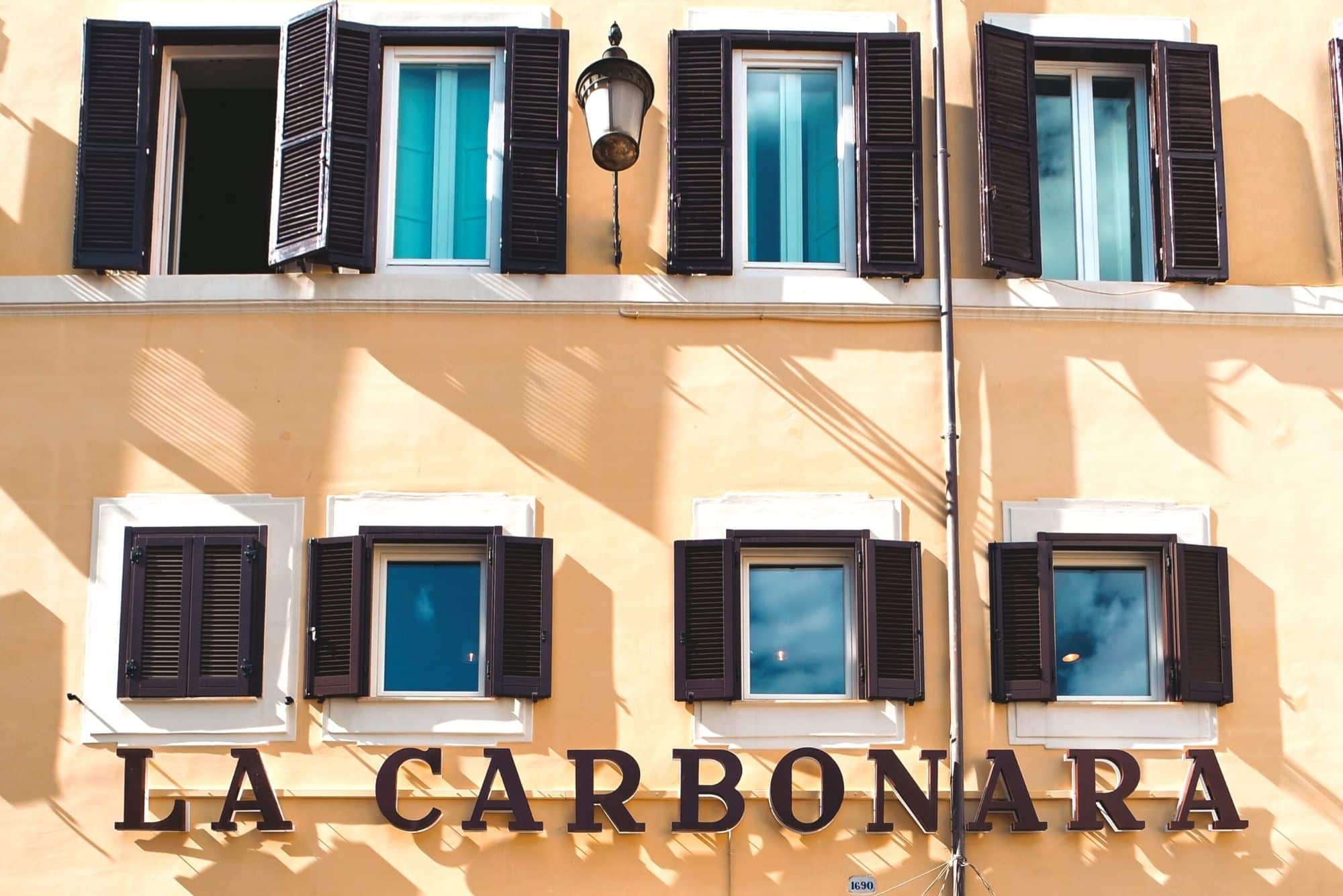 So, I immediately take the pretext to go backwards along the path among Roman dishes starting from the youngest of the four in chronological order, the Carbonara, which next to the Cacio e Pepe, the Gricia and the (a) matriciana (again the “a” in brackets!), populates the gotha of the acclaimed traditional Roman foods. A wise, rich and enjoyable mixture of eggs, cheese, guanciale and pepper. It is an equally rich mixture of legends and improbable stories about food in Rome.

I immediately tell you that the question that afflicts the carbonara lovers have not a single answer, to be precise it have not a single, certain, incontrovertible and unassailable answer. The crusaders of absolute truth would answer the question about this traditional Roman food with a categorical and complacent NO! I think I can say in all serenity that the answer can legitimately oscillate between a hypothetical “Maybe” a measured “Could“, a possibility “Why not?”.

Let’s rely on the only factual elements, the historical recipe books, as well as on a pinch of common sense that never hurts, to start dating the recipe. Could charcoal burners from Abruzzo who worked in the mine ever carry pans stuffed with pasta topped with eggs and bacon? A match that at the time, among other things, was completely absent from recipe books. And it seems plausible that the name of the recipe was due to the coal powder accidentally ended up on the dish? 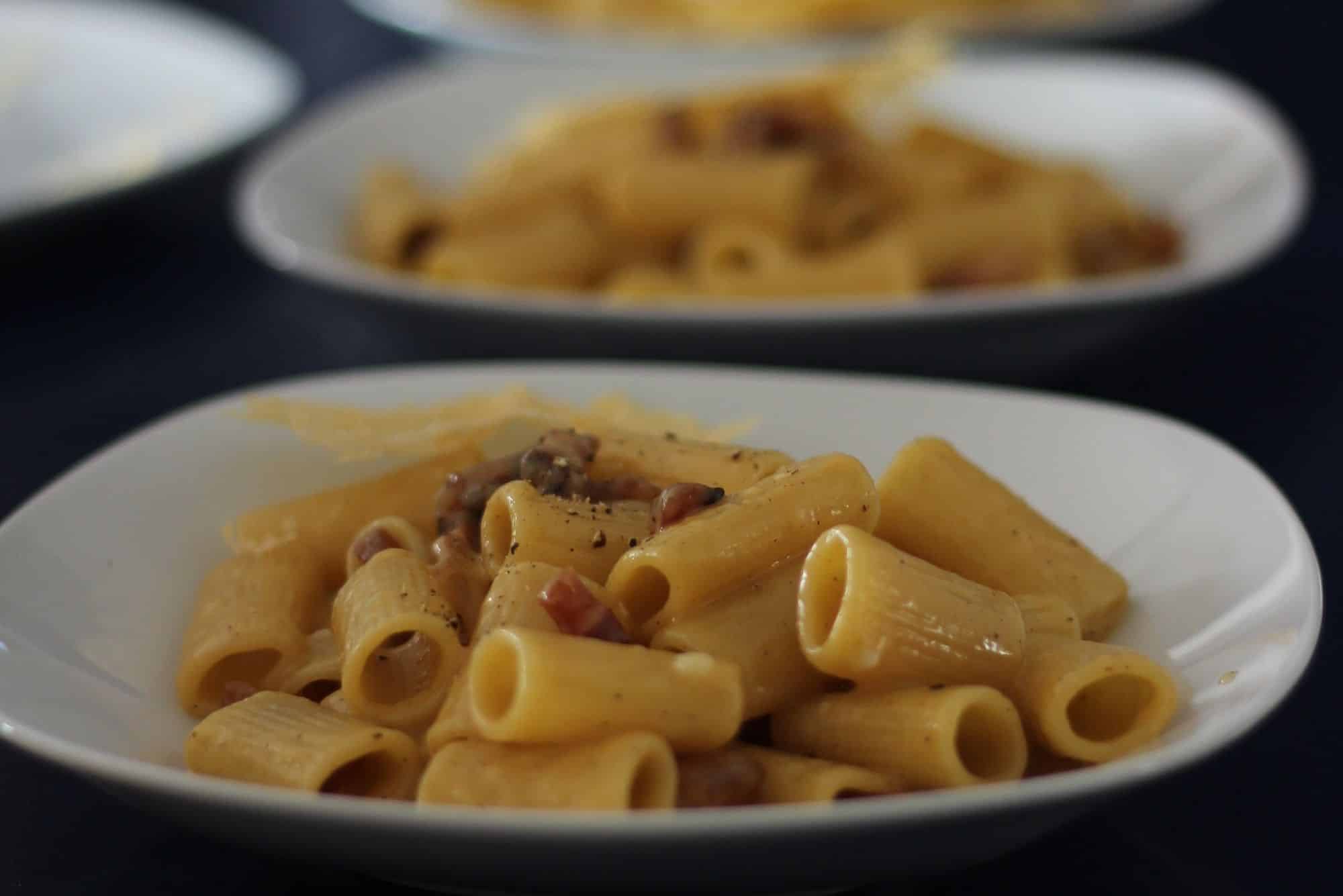 So then it would be appropriate to move the clock forward to try to resolve the long-standing ‘cow milk’ issue in one of the most famous Traditional Roman foods. Let’s jump towards the end of the Second World War and rummage in the rations of the American and British army. What do we find good? Bacon, egg yolk powder, cheese and – listen, listen! – according to some written evidence, a fabulous milk cream! And besides this list of ingredients, the story never denied about a young chef of Bolognese origin (eh I know, this is a blow to the heart for the Romans and for Traditional Roman food lovers), who then moved to Rome following of the allied troops. Apparently the whimsical talent has drawn fully on those rations by seasoning the pasta with the ingredients of the American breakfast for the first time, in tribute to the allied troops gathered in Riccione.

How many victims did this heretical clarification reap on one of the most famous Roman traditional foods? And if we add a small technical note according to which the addition of milk or cream in the egg increases its minimum coagulation temperature, thus limiting the risk of protein overcoagulation and the consequent “scrambled egg” effect, to the complete advantage of the creamy result of this Roman pasta, would we still be able to respond unequivocally with a NO? And why, at this point, do not also allow the use of pancetta instead of guanciale and Parmigiano Reggiano alongside Pecorino Romano, if the first carbonara reported totally “overseas” ingredients?

And now we come to that (a): Amatriciana or Matriciana? Amatrice or Rome? Derivation of the gricia from Amatrice or of the Grici, bread sellers in 15th century Rome? Onion yes, or onion no? Striped guancale or chopped guanciale as it was used before the sixties?

I have an obligation to inform you that during the recent lockdown the Pasta Amatriciana regulation was approved, with witch Amatrice asked to seal the official nature of the ingredients contained in its Pasta Amatriciana. This has therefore become a Traditional Speciality Guaranteed (TSG) recognised by the EU. The official recipe lists the following ingredients: pecorino, pepper, guanciale, extra virgin olive oil and wine for the “white” version, chilli and high-quality peeled tomatoes in addition for the “red” version. 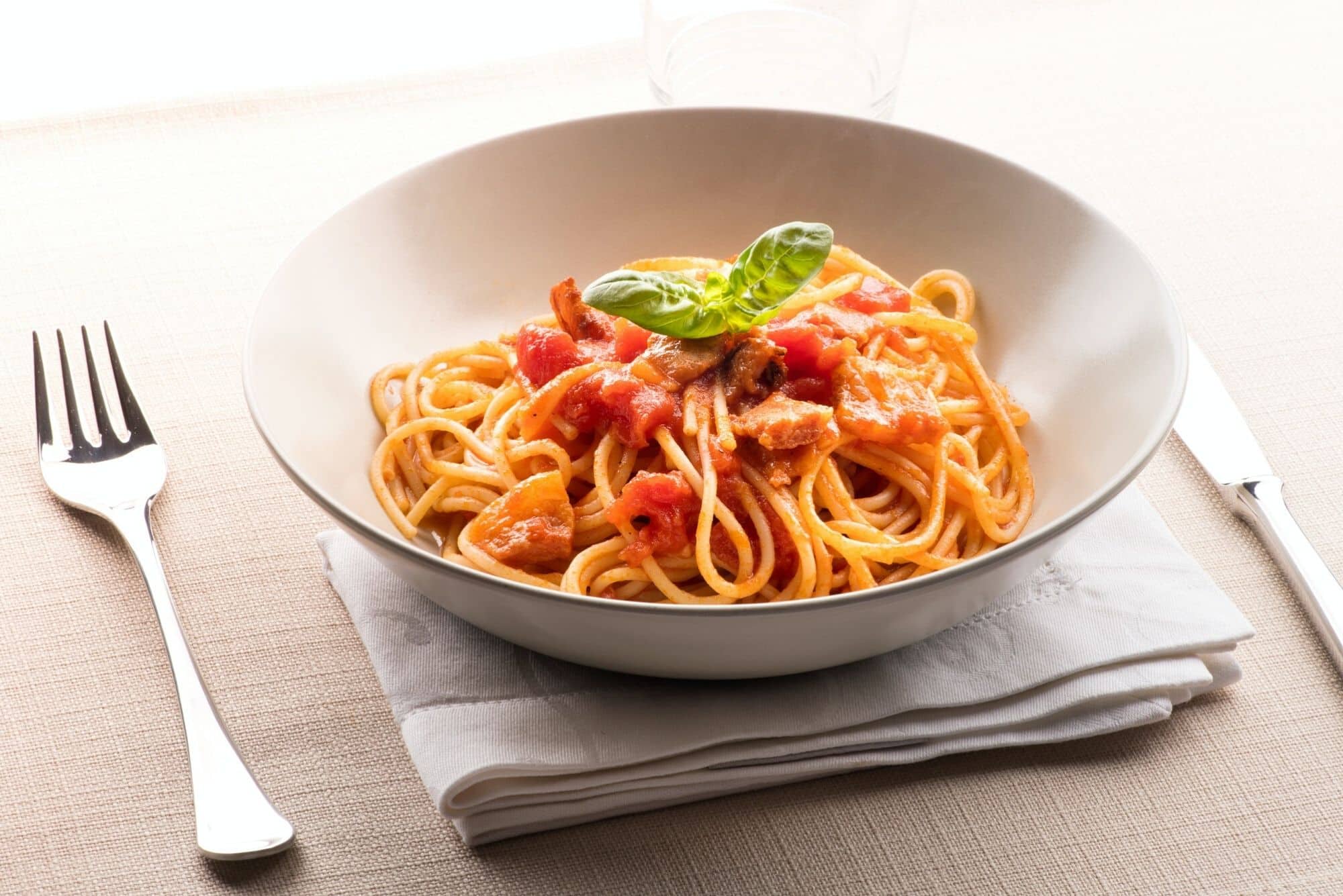 So what happened to the Matriciana from Rome, one of the most famous Roman meals? The one that, at the beginning of the century or in Ada Boni’s texts about the Roman cuisine included onion, guanciale cut into small pieces, lard? And the Pasta Amatriciana by Aldo Fabrizi, who in his book on Pasta asciutta, a sacred text about the cuisine of Rome for my family and I, quoted without being executed on the altar of intransigence, onion, ginger, pancetta and guanciale, vinegar, Parmigiano Reggiano, Pecorino and basil? And I like to remember the “Matriciana in bianco” made by my father, a Roman with Abruzzo origins, transhumant of origin and heart, who prepared this Roman pasta with slowly stewed onion and minced guanciale, a dish of pure poetry. And while we discuss about Traditional Roman foods, I want to reveal a secret about my Roman dishes. In my (A) matriciana made with the ingredients of the regulation, I do not use wine, but I let the guanciale marinate in the grappa. Here, I said it, I took a burden off my heart. Try it and you can tell me.

And we come to the two great-grandparents of Roman Traditional foods, the cacio e pepe and the gricia, which involves the addition of pecorino and pepper. Simple Roman dishes that tell us about the transhumance between Lazio, Abruzzo and Umbria, saddlebags full of non-perishable dry products: seasoned sheep’s cheese, peppercorn, dried meat in addition for gricia. Few and simple ingredients for two Roman traditional foods, two excellent comfort food that arrived on our tables through a journey through centuries. 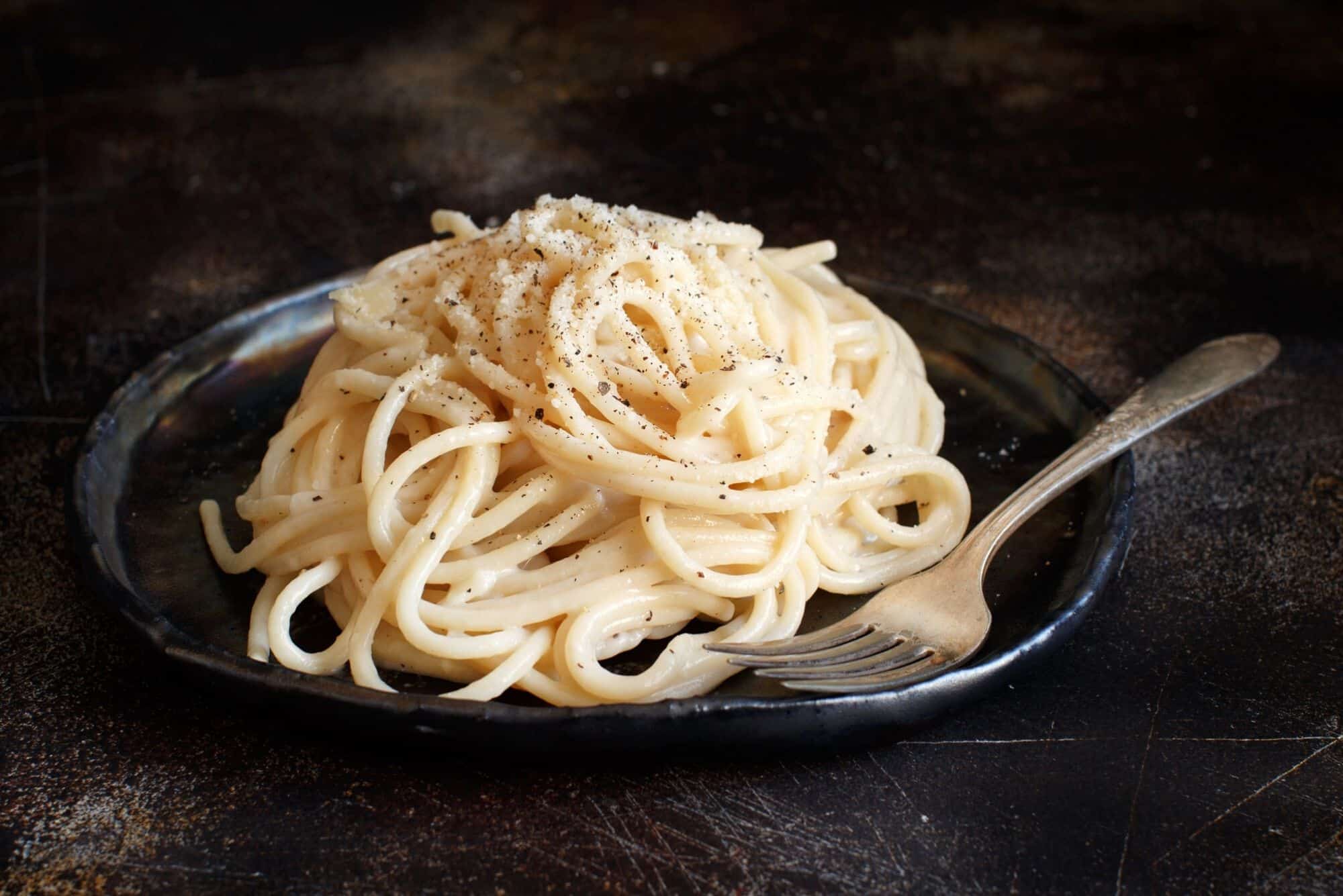 What did we learn in this brief excursus on Roman meals? That the beauty of a dish lies in the ingenious intuition of the first cooks, in their creative flair and in that of future custodians, in the care taken in the realisation, in the generosity of sharing, in the goodness of the ingredients, in the magic of word of mouth, in the gradual adaptation over time and space of the first version. Every time we make one of these Traditional Roman fooods, in Rome, in Amatrice, in Lazio, in Abruzzo or everywhere in Italy and in the world, we add a new piece to the magical and rich universal language of flavours. I say hello to you, thanking you for following me so far in this excursus on Roman pasta dishes and leaving you the motto that I love to dispense to my students at the end of the cooking class: If it works for you, it’s ok for me!

Did you like the article on Traditional Roman Foods and Roman pasta recipes? Book your cooking class at Sabina’s cooking school in Rome and feel the thrill of cooking traditional Roman foods like a chef!