Matera, City of Stone and home of pistachio

Matera, City of Stone and home of pistachio

Matera is an amazing city in Southern Italy that can be called an “open-air show”. Its particular shape makes it an enchanted scenery, so much that it is compared to a beautiful nativity scene. The urban centre, in fact, developed around natural caves carved into the rock.

Nothing can be more intriguing for a tourist than visiting this charming place, almost like a movie set.

Indeed, it was the backdrop for scenes in several films. Mel Gibson chose Matera to shoot scenes from the film movie “The Passion”. Pier Paolo Pasolini considered it the ideal set for “The Gospel according to Matthew”. Matera has an ancient and modern character at the same time to be considered a location between the present and the past. Cary Fukunaga, in fact, shot some scenes of the latest 007 film, “No time to die“, to be released in the spring of 2020.

Matera has a unique architecture that cannot be reproduced in any way.

Are you fascinated by Basilicata? Discover all the Italia Delight experiences! 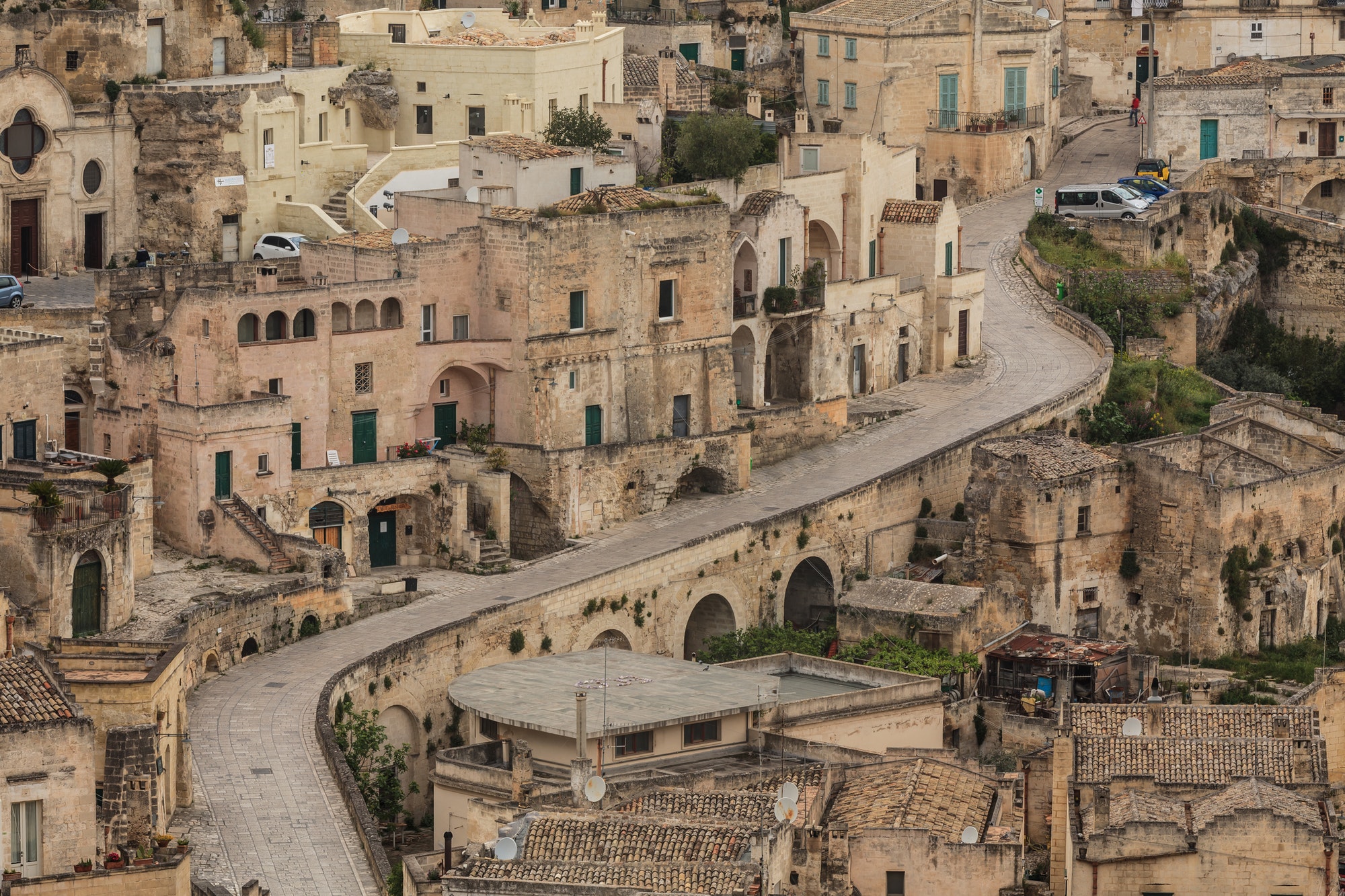 Today as in the past, refuge for men

Matera has always been an ideal refuge for humans. Numerous testimonies tell that the first human settlements date back to the Paleolithic Age. Objects from that period suggest groups of hunters who found refuge in the caves scattered along the ravines. In the Neolithic Age, these temporary settlements became stable dwellings of primitive men. 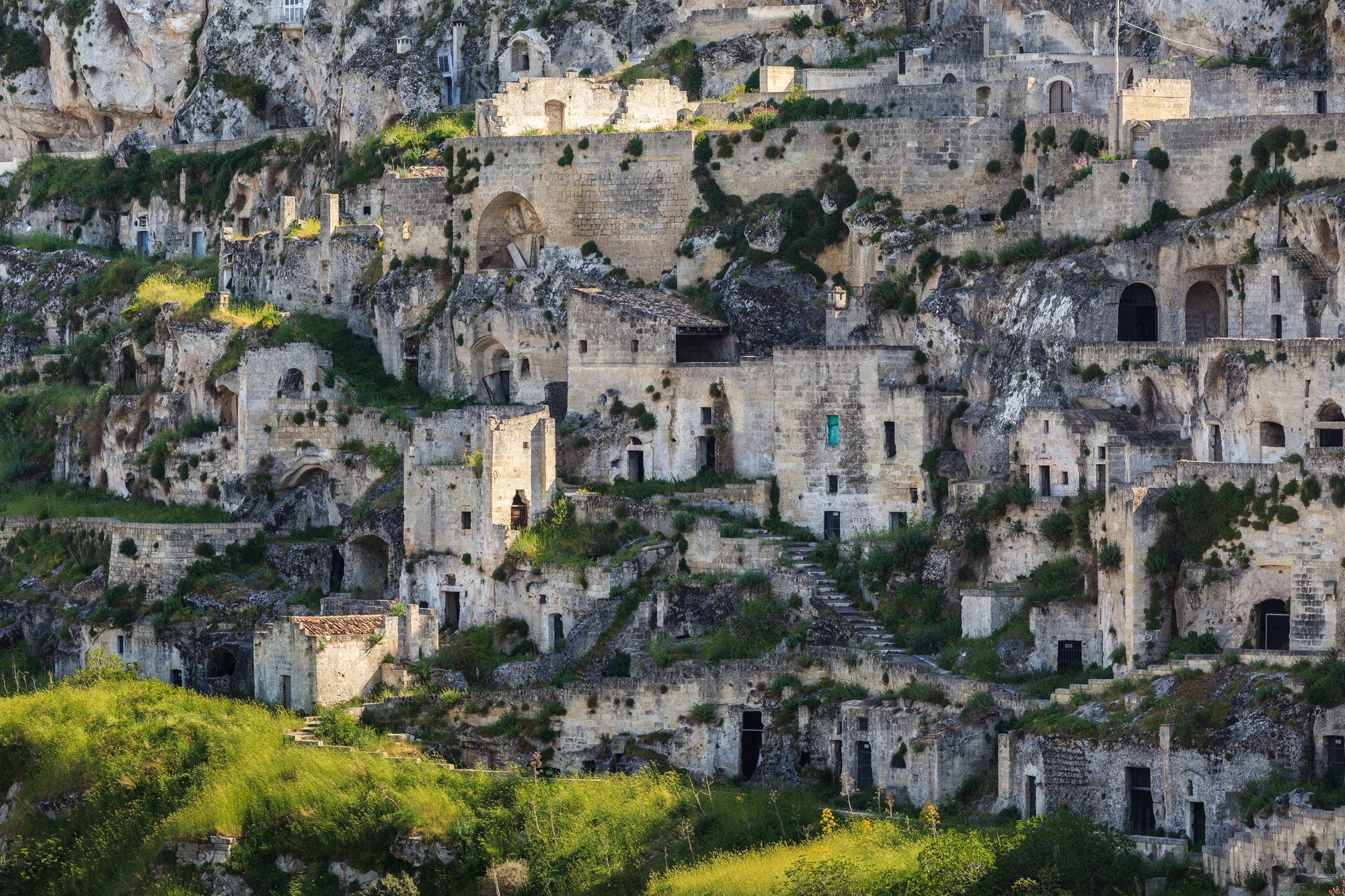 Over the following centuries, Matera was the bone of contention between different peoples who wanted to submit it to their dominion. Fierce battles took place between the Lombards, Saracens and Byzantines. At the same time, communities of Benedictine and Byzantine monks built rupestrian churches along the banks of the ravines.

Under Norman domination, the city experienced a period of peace when it began to take shape and create its identity. Although the Sassi have been abandoned for a period, due to agrarian reform laws, Matera has risen more beautiful than before taking its great revenge. In 1993 it was declared a UNESCO “World Heritage Site“. In 2014, the city was elected European Capital of Culture 2019.

The “Gravina di Matera” is a deep gorge that divides the territory into two parts. The Sassi were excavated just behind it.

The Sasso Barisano looks north-west and is the beating heart of the old city with palaces, tunnels, portals and ancient buildings. The Sasso Caveoso, on the other hand, has the shape of an amphitheatre and covers a wider area. Man has been able to create water control systems with zero environmental impact, essential for the life and needs of the community. The friability of the rock was exploited to create slopes that flowed into rainwater cisterns. For a long time, they have been a real asset for the local community that has been able to adapt to nature. 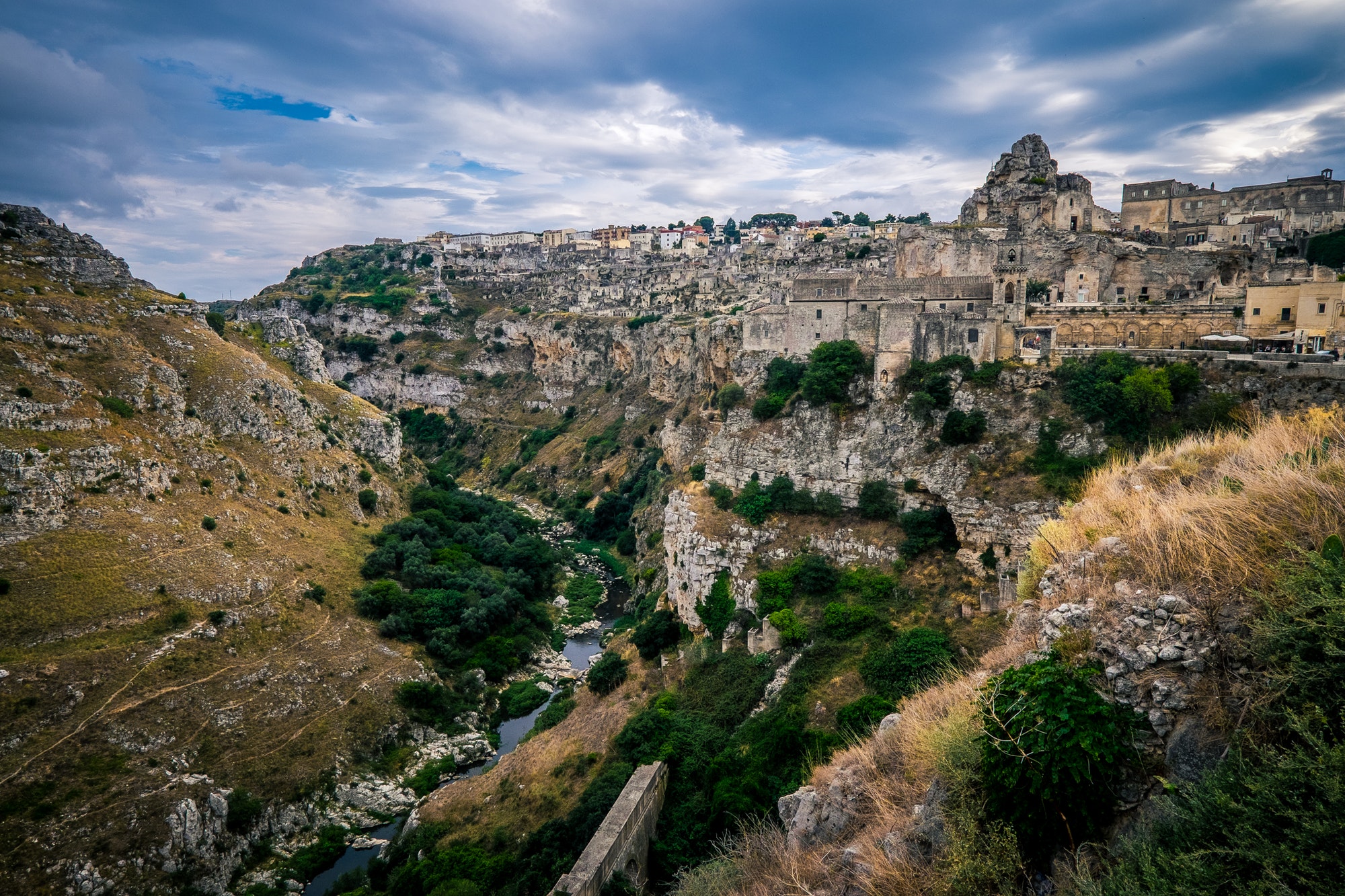 All this up to the mid-twentieth century, when the agrarian reform ordered the evacuation of the Sassi for reasons of hygiene and sanitary degradation. They were even identified as “National Shame”. For decades, this natural artistic heritage has been abandoned, in the hope of a proper recovery.

But Matera, always a free spirit motivated by a strong link with the territory, has managed to obtain a recovery of the Sassi since 1986.

Matera: cultural tourism and much more…

Your journey to Matera is a timeless and exceptional adventure. Each step is a continuous discovery of all the opportunities offered by this ancient, but always contemporary place. Matera’s long tradition is made up of rites, festivals, folklore, gastronomy and entertainment that make up the convivial side of the city. Matera has a lot to offer.

After learning more about the city and its history, you could visit the wonderful villages close to the Lucanian Dolomites. These peaks, to which imaginative names have been attributed, interrupt the sweet Lucanian landscape by standing proud. 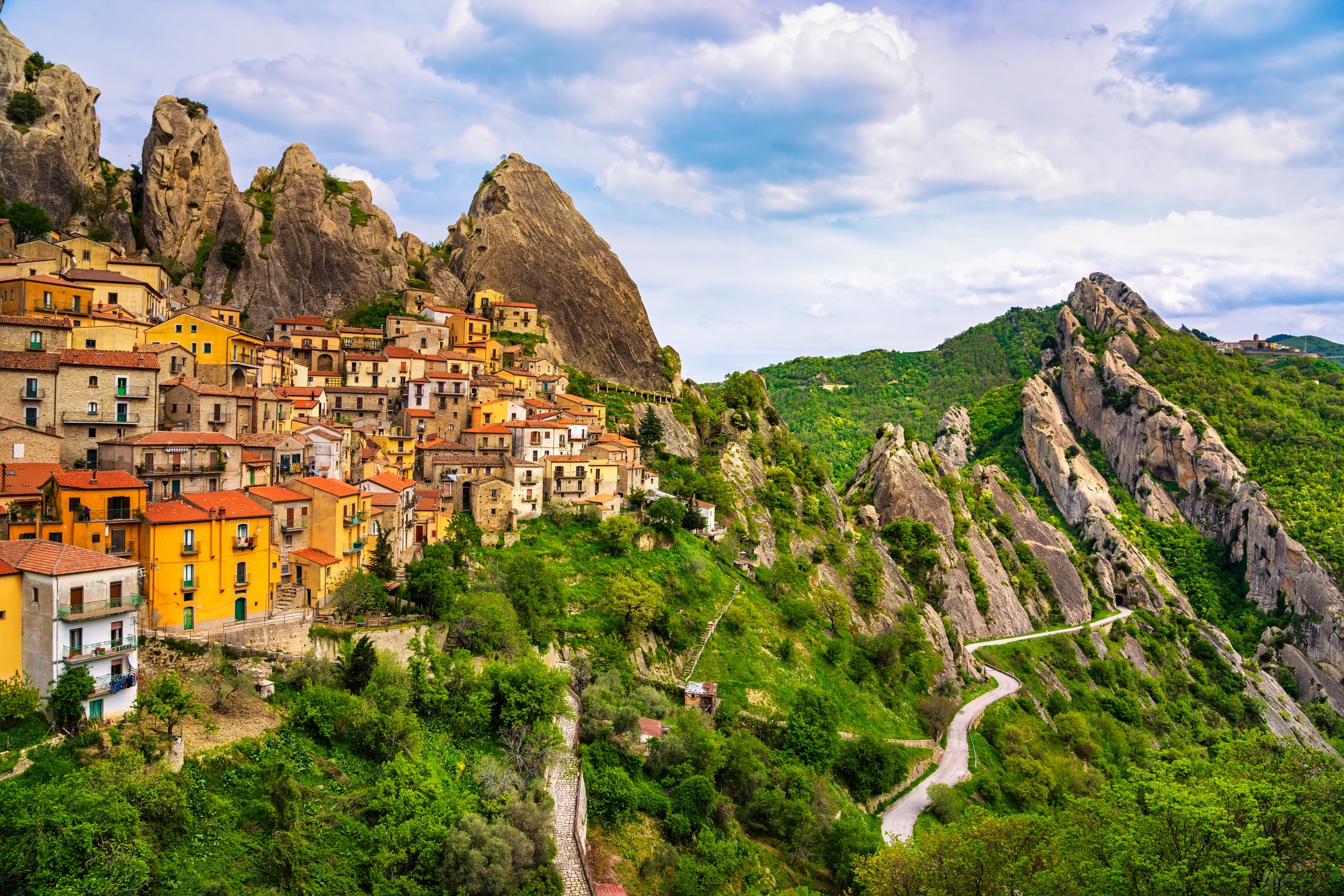 If you are a sports lover and thrill seeker, you should experience the “Angel Flight“. It is about letting go suspended on a rope 1000 metres high, from Castelmezzano to Pietrapertosa.

Alternatively, you could stay on the mainland and join the guided itineraries designed to discover these enchanting places. One of these is the “Path of the Seven Stones” that connects the two villages,  crossing a Roman bridge. Castelmezzano is one of the “100 most beautiful villages in Italy“. This is a beautiful corner of Basilicata, where the rock is the protagonist as in Matera. Pietrapertosa, on the other hand, preserves an ancient Saracen quarter and the remains of the castle.

Discover the charm of the Lucanian Dolomites!

Matera: the home of the pistachio

The wonders of Matera do not end here. Matera, besides stimulating your artistic, historical and cultural curiosity, will also manage to tempt your taste buds.

You can’t leave Basilicata without learning more about the food and wine from Matera, home of the pistachio. In Stigliano, wonderful pistachio trees are grown and give rise to as many wonderful fruits. 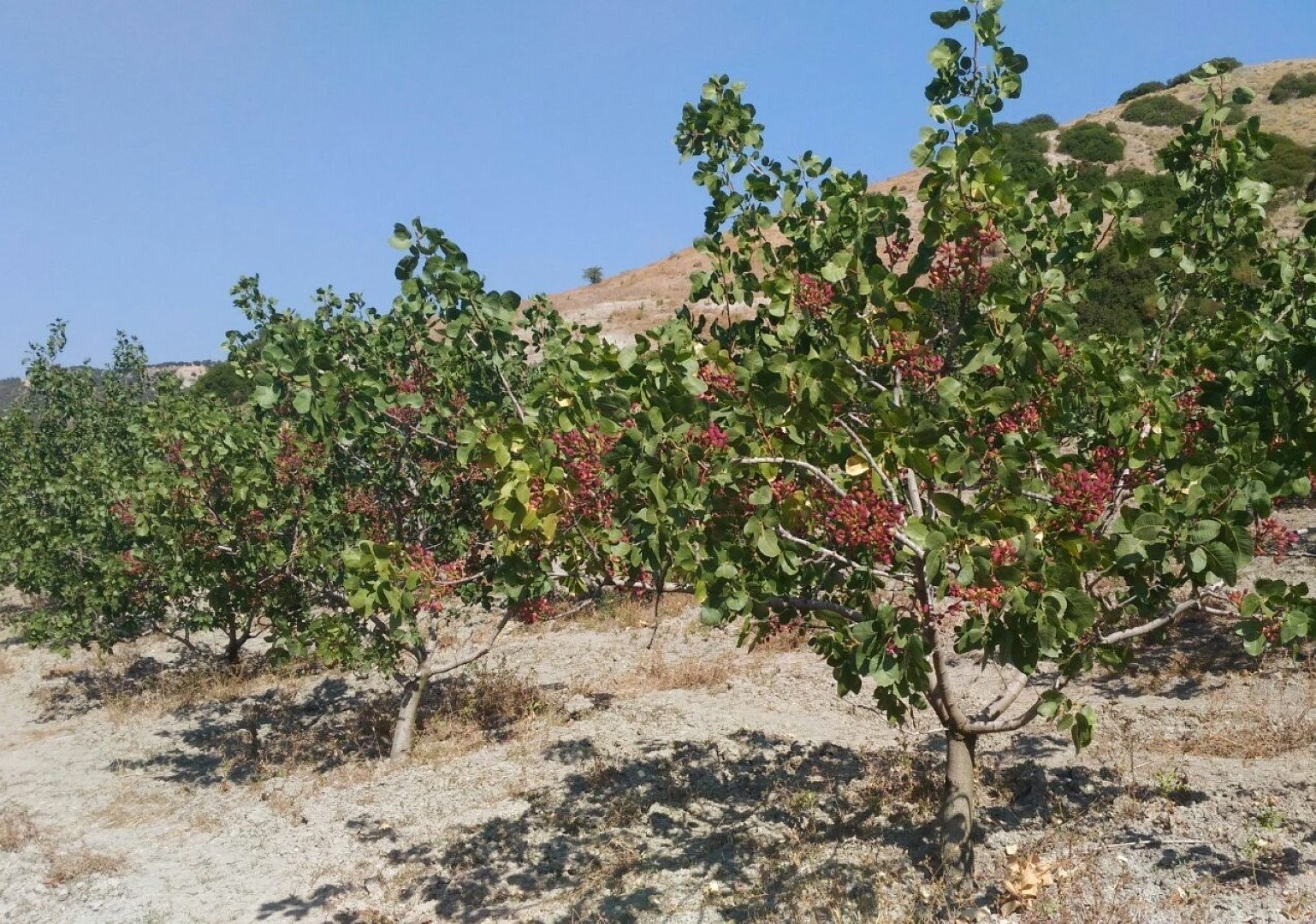 Legend has it that the pistachio has supernatural powers and is able to give those who eat it a good mood and a new-found joie de vivre.

Before leaving, don’t miss the chance to taste the traditional pistachio-based products. Pistachio is used for the production of spread, grain, pesto, paste and flour. If you want a real delight to the palate, don’t forget to taste it naturally. Your body will benefit above all from this food intake. Its mineral, vitamin, carbohydrate and fibre content will be a valuable asset.

Did you like the article on Matera? Book now your Food Experience with our Italian Experts!