Ivrea: things to do and see

Ivrea: things to do and see

Ivrea: where it is located, its origins, the ancient and the industrial city

Ivrea is a town located at the foot of the Alps in Piedmont. It has been considered as the capital of Canavese, a territorial area north of Turin, since ancient times. Ivrea is a town rich in history. In fact, it is known with certainty that it was founded by the Romans in 100 BC, based on an ancient pre-existing settlement.

Are you fascinated by Piedmont? Discover all the Italia Delight experiences!

A very important feature of Ivrea, which attracts tourists from all over the world, is its position on the Via Francigena.

In the past, the Via Francigena had a very important and strategic value. Arriving from the north, from the Aosta Valley, people stopped in Ivrea and then continued on to the vault of Rome. This route was indeed a prolific area of exchange and communication. Not only merchants but also politicians, entire armies as well as learned and rich men of culture passed through it. The Via Frangigena Morenico-Canavesana, this is the full name, extends for about 50/55 kilometres. The stretch of the Via Francigena near Ivrea is highly suggestive: it is the stretch of the Morainic Amphitheatre. This arose from the Balteo Glacier, once it retired due to the change in climatic conditions.

The original name of Ivrea was Eporedia, meaning “horse-drawn equestrian cart”. Currently the city is distinct in two main areas: the ancient city and the industrial city. 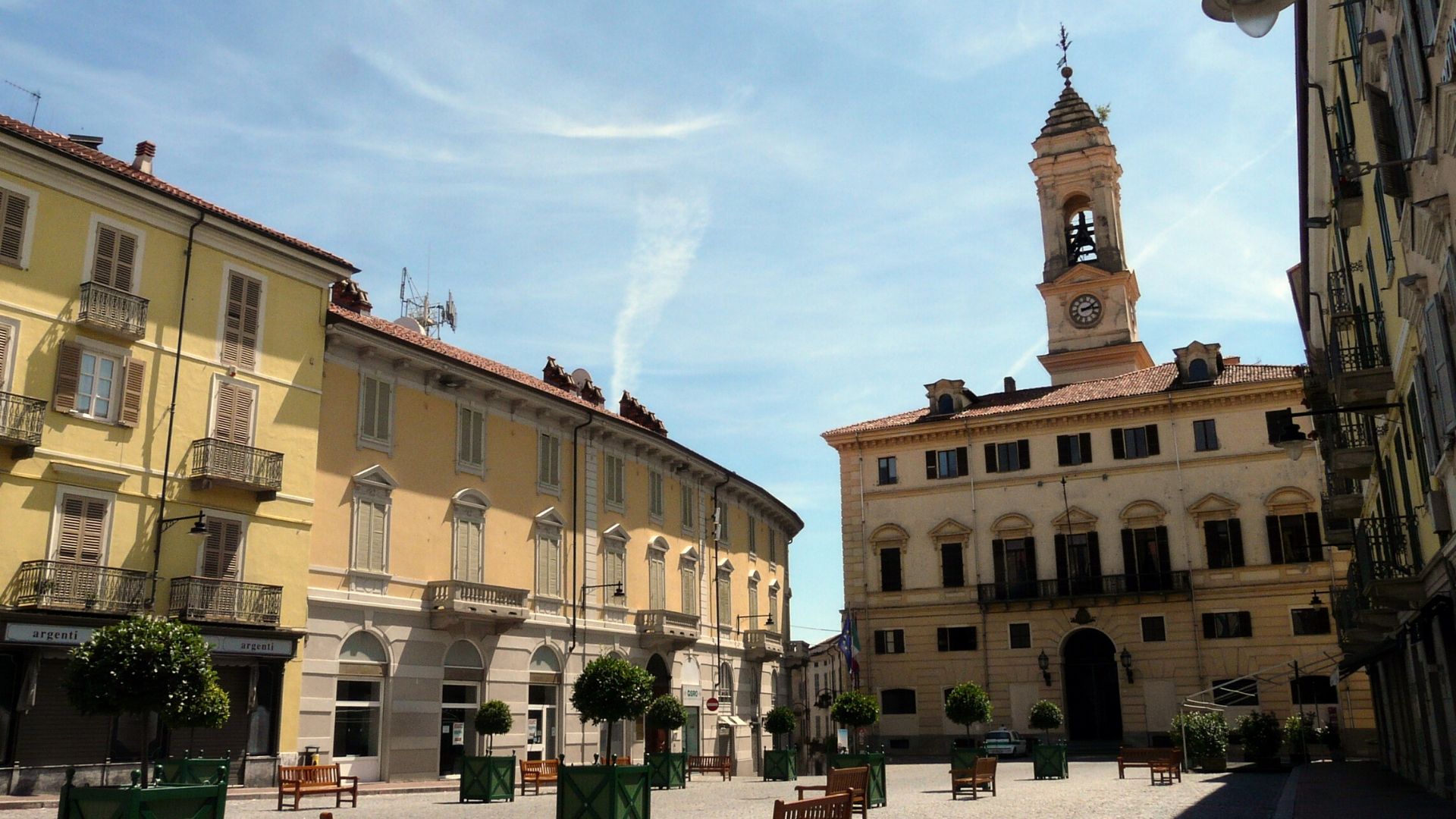 As for the former, it is advisable to visit the ancient city on foot as it is rich in cultural and historical attractions.

The ancient city of Ivrea contains medieval and Roman remains such as the Ivrea Castle, the Cathedral of S. Maria Assunta, the old bridge and the “borghetto”, a small urban area located beyond the “Ponte Vecchio” bridge.

As for the industrial city, it should be mentioned that Ivrea has become a UNESCO World Heritage Site. The city offers an itinerary linked to the Olivetti heritage concerning architectural and urban planning. In July 2018, UNESCO recognised Ivrea’s industrial city of the early 20th century as a World Heritage Site. The Olivetti factory was opened in 1908 and was immediately not only a simple company but a real industrial city within the city of Ivrea. Next to the working spaces, there were the areas to be lived together with the community and the residences for the employees.

Ivrea offers its visitors a beautiful and fascinating nature trail which includes five lakes. The ring of the five lakes is one of the most beautiful areas in the region and offers travellers the opportunity to visit it on foot or by bicycle.

Lake Sirio is the largest, the most famous and the most suitable for swimming. The Nero lake is highly suggestive, wild and accessible through a circular path. Pistono lake is completely surrounded by nature among chestnut trees and vineyards. The Campagna lake allows you to enjoy a magnificent view of the Canavese area. Finally, there is the Maresco di Bienca ring, where you can observe the ruins of an ancient Roman aqueduct.

Impossible then not to name Ivrea without referring to the Balmetti in Borgofranco.

These are a natural phenomenon that has come about over the centuries. The word “balmetti” means caves but in reality they are architectures, natural cavities arisen spontaneously among the rocks. These cellars rise attached to the rocks and they are about 300. They have been and still are particularly important for the refinement and aging of wine. In fact, the temperature is always constant around 7° C, whatever the season. The Balmetti in Borgofranco are certainly a territorial treasure of the Canavese-rivarolo area and one of the best places to visit near Ivrea.

The Carnival of Ivrea is part of a very important historical tradition and is an Italian event known all over the world. Dating back to the medieval period, it develops around legends affecting characters such as the miller, the baron, the general, the officers on horseback and many others.

Certainly the carnival of Ivrea is also known for the “Battle of the Oranges”: tourists and common people flock to the streets wearing a red hat (Phrygian cap) and fight with orange blows. 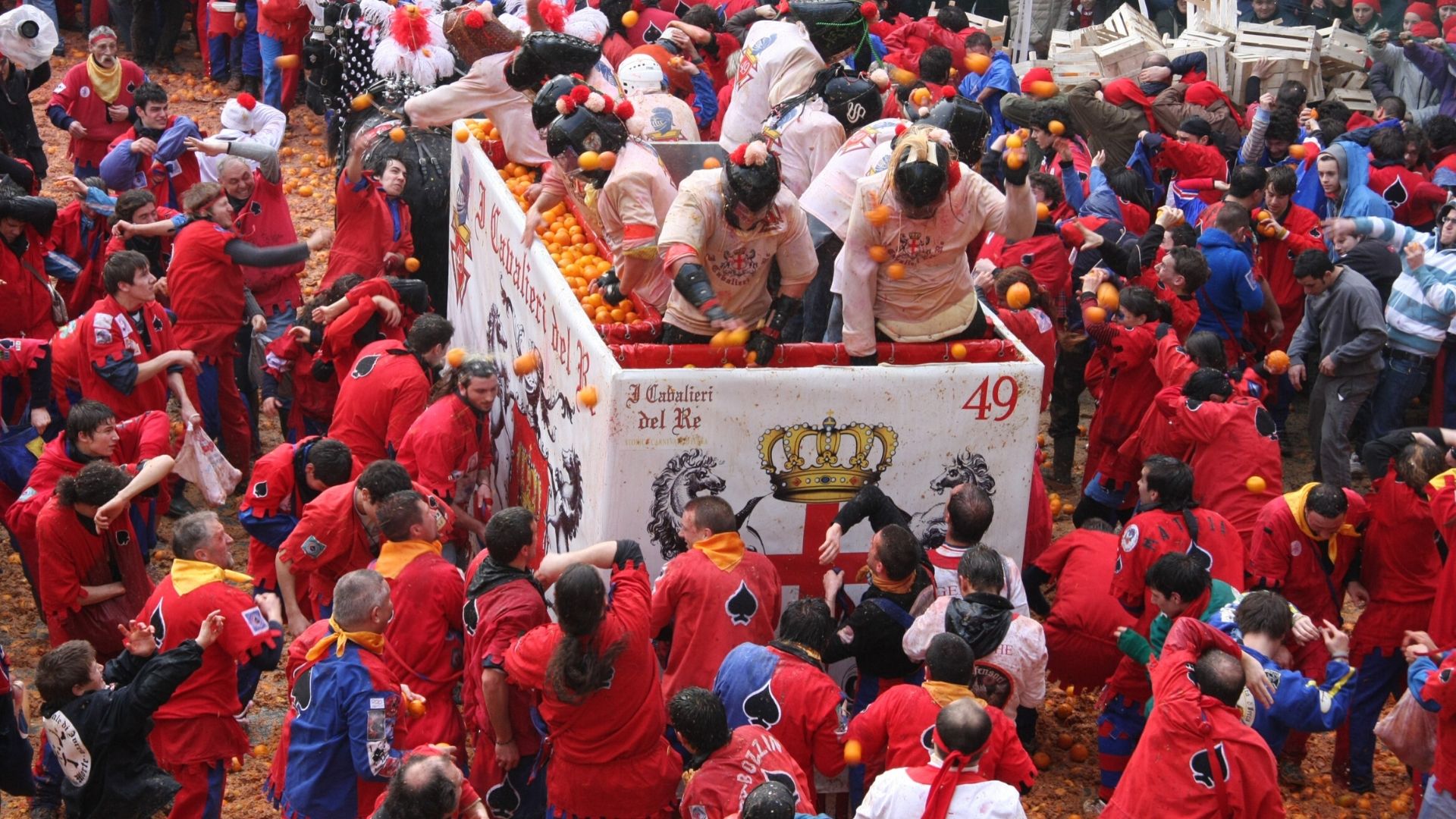 Ivrea is also known for the production of fine wines such as the Erbaluce di Caluso, Carema DOC and Canavese DOC. The first is a dry white wine made from the Erbaluce grape variety. The Carema DOC comes from Nebbiolo grapes (minimum 85%) and gives origin to a red wine from Ivrea with an important refinement. Canavese DOC can be a white wine made from Erbaluce grapes, rosé or red wine from Nebbiolo, Neretto or Freisa grapes in different percentages.

As far as for gastronomy, the miasse are very famous in this area. They are crunchy rectangles cooked with maize flour, eggs, oil and water to be accompanied with a slightly spicy cheese (the so-called “Salignun”).

Did you like the article on Ivrea? Book now your Food Experience with the Italian Experts!