Towns and flavours of the Ligurian Riviera

Towns and flavours of the Ligurian Riviera

“Treasure hunt” along the many hidden treasures of the Ligurian Riviera (West Riviera): from the beautiful inland villages rich in history to “Ligurian gold”, high quality extra virgin olive oil, together with food and wine excellences, to move on to the fascinating ancient caves on the Ligurian coast.

Customise this tour directly with the local Expert who organises this tour between Ligurian Coast.

Arrival in Sanremo, the city of the famous Italian Song Festival and one of the best known places on the “Riviera dei Fiori”. Accommodation in the hotel and free time to relax by the sea or to discover the centre with its shops. Dinner on your own.

The day will be dedicated to a unique and authentic experience in the hinterland of the “Riviera dei Fiori” in one of the characteristic medieval villages that embellish this beautiful corner of the Ligurian riviera.

Our tour guide will accompany you during the guided tour of Badalucco, a splendid medieval village, full of charm and renowned for the production of high quality extra virgin olive oil. Badalucco is a magical and lively town, where you can spend a day dedicated to wellness and relax. You will discover the medieval village with stone houses overlooking narrow alleys and covered passages (“caruggi”), the path of ceramics, the historical-artistic emergencies and you will learn the local traditions that are still handed down from father to son.

At the end of the guided tour, you will take a pleasant walk through enchanted places and let yourself be pampered by the music of the water flowing in the stream and the scent of Nature. You can admire the olive groves cultivated on dry stone walls, small vegetable gardens and the splendid village of Montalto on the heights.

Your treasure hunt on the Ligurian Coast continues and you will reach an ancient olive mill which produces the “green gold”, extra virgin olive oil. Together with the olive oil producer, you will visit the olive groves and the mill.

Our expert will show you the characteristics of the extra virgin olive oil that you will taste and will accompany you during the sensory experience of the guided olive oil tasting. But the surprises are not over yet. The experience includes the typical “snack” of the mill, prepared with local specialties and paired with a glass of Ligurian DOC wine. You will prepare the “cundiun”, one of the simplest and most delicious dishes, made with tasty tomatoes, vegetables, extra virgin olive oil and Taggiasca olives, served with Triora bread (typical dish of the Argentina Valley).

In the evening, return to the hotel, dinner on your own and overnight stay.

Breakfast at the hotel and free visit to Albenga, a seaside town and a vital centre of fruit and vegetable production. The historic centre preserves the Roman urban layout of the ancient city of the “Liguri Inganni”, and boasts valuable medieval monuments.

Climb towards the archaeological area and the Via Julia Augusta, taking the direct route to Monte Bignone (over 500 meters). The visit flanks the ruins of a necropolis of Roman origin, which transmit a feeling of ghostly stillness in stark contrast to the enchanting island of Gallinara, in the background, a jewel set in the sea.

At the end we will visit an ancient olive mill, which has been located within the medieval walls of the city of Albenga for over 100 years! It is still today the place where the family produces cold “must” extra virgin olive oil and where all the specialties of the Ligurian cuisine are sold, in full respect of craftsmanship and without adding additives and preservatives.

To make the olive mill one of the most spectacular places in the Ligurian riviera, it is precisely its location within the medieval walls. The walls themselves turn merge with other walls of Roman origin. Under the ribbed vaults it is possible to find old agricultural tools, jars, presses, objects, which the owner collected over the years, and photos of olive trees, without forgetting the unmistakable smell of olive processing.

Obviously, in the Ligurian coast olive oil processing also had to adapt to EEC directives: for this reason, the old millstones remained only for display, to make room for technology, today the protagonist of olive oil production.

Next to the olive oil mill, there is also the “Civilta dell’olio” Museum, strongly desired by the owners’ family and entirely dedicated to the civilization of olive oil: in these spaces, you can see and touch the whole history of one of the most ancient and important jobs in the Liguria coast.

Today the Museum is connected via an underground tunnel to the olive il mill: a single space has been created entirely dedicated to the world of olive oil and its production. It contains the whole history of olive oil civilization, but also a lot of contemporary art, from painting, through sculpture, to photography. In fact, in these rooms the owners offer artists the opportunity to exhibit their works of art.
The museum has hosted personalities like Federico Moccia, Antonio Ricci and Vittorio Sgarbi.

Lunch on your own and departure for the return.

Payments: 100% at the time of booking

We recommend to subscribe an insurance policy that covers any penalties in case of cancellation of your tour of the Ligurian Riviera. Read the Terms and Conditions of Italia Delight (art. 11).

Hello! I’m Giada, owner of a tour operator based in Genoa specialising in the organization of holidays in Liguria, group tours, organised trips, team building and incentives throughout the Ligurian Riviera and in the entire region.

We are a team made of six girls: with professionalism and competence we will help you planning each trip, always tailor-made for you. We love to make you discover Italy between adventure, culture and relaxation with the security of 24h assistance.

You just have to pack your suitcase: we will let you discover the most authentic corners of the region between nature, art, food and wine!

To send a trip enquiry, contact the local Expert who organises this trip.

There are no reviews yet. 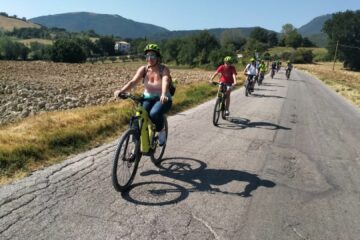 E-bike weekend from Cingoli to Recanati

A weekend in Le Marche region to
Marche
3 days
€ 38

Visit Basilicata in an authentic way among
Basilicata
7 hours
€ 199

The Sensory Analysis of Rice